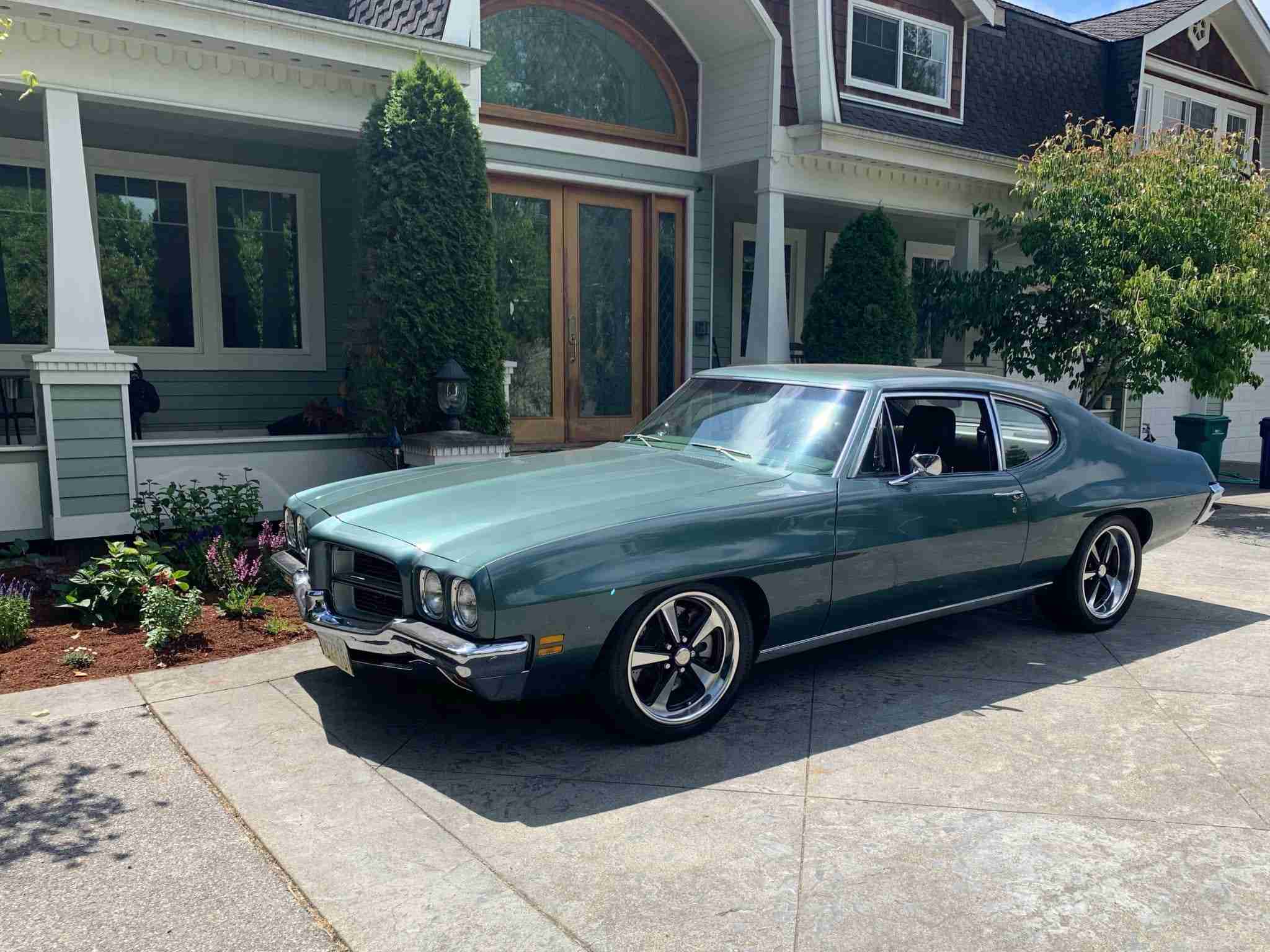 After weeks of routing fuel line, wiring the new throttle body, installing the new in-tank fuel pump and the new fuel tank, my 1972 Pontiac LeMans was finally running. Holley tells me its Holley Sniper EFI is self learning, and the method to teach it is to drive the car. I made time to drive the car on local back-country roads, excited to see the results of my hard work.

There is a new process to start the car. The old process of waking a cold LeMans involved cranking the starter until the fuel pump refilled the bowl of the Quadrajet carburetor (because modern fuel disappears faster than Spodi at the local fraternity’s Freshman orientation), pumping the throttle pedal to squirt fuel into the engine when the carb does finally fill and then, because my Quadrajet was built without a choke, feathering the throttle when the engine fired to life. Once started, I would need to wait until the engine had a bit of heat in it before driving away, otherwise the car would buck like a bronco forced to listen to Journey for an hour. The new, EFI-improved, method of starting the LeMans is to turn the key to “on”, wait a few seconds for the electric fuel pump to prime the system, then start the car. Once started, the EFI’s computer takes over and manages everything. I can just drive away, like it’s some sort of future car. Or a 1986 Honda.

Driving away from the house, I immediately noticed the throttle pedal felt like it had too much resistance. I had used the old throttle return spring from the Quadrajet, where it was fine, so I assumed this throttle body just had a different feel. It made it hard to make subtle changes to the throttle. The engine warmed up after a few miles, but the modulation of the throttle did not improve. It felt more like an on/off switch rather than a linear input.

“Let’s see what this can do wide open”, was naturally my first thought once the engine was up to temperature. I gunned it in second gear and at a certain point in the RPM range, I heard a loud whine or whistle. “Is a belt loose?” I wondered. It kind of sounded like a supercharger. “In the midst of all that work, did I install a blower?” I wondered. “No, that can’t be it.” I ignored that for the moment and enjoyed the train-like thrust of the Pontiac 400. It revved to redline (only 5500 RPM for this Pontiac) smoothly and powerfully. Before, with a minuscule 5/16 inch diameter fuel line, the carb’s float bowls would run out of gas during a full throttle run. With the new electric fuel pump, 3/8 inch supply and return lines and 60 psi of fuel pressure supplying the Sniper EFI, the engine feels like it will rev until expensive metal parts explode through the oil pan. “That’s good. I like this”, I concluded.

The public “debut” for the LeMans took place at the grocery store at the bottom of the hill. Our daughter’s high school’s DECA holds an annual car show in the parking lot and I had signed up as one of the sponsors. Daughter insisted we bring as many cars as possible, but the number of drivers available limits this number to three. I entered the Corvette and LeMans in the show. Our 20 year old son brought his grandpa’s ’57 Chevy. We didn’t win any trophies, but there was a great turnout, we had a good time and both cars started when we left.

After putting some miles on the new EFI system, I researched some of the issues I observed. The whistling noise was definitely a thing with the Sniper EFI. The solution was to install a 4-hole spacer under the throttle body. I obtained a 1/2 inch thick, 4-hole Woodfiber Laminate spacer and re-routed the fuel line to account for the extra 1/2″ of height. A test drive revealed that the spacer improved but did not eliminate the noise. Perhaps a 1 inch spacer might eliminate it altogether, but I am running out of hood clearance at this point and don’t want to cut a Roadkill-style hole in my pristine hood. I can accept the current level of whistle.

The problem with the throttle feel was due to the linkage style of the throttle body. When one presses on the accelerator pedal, all four throttle blades open at once. The driver is working against the springs of both the primary and secondary throttle blades. The solution is to install a progressive secondary throttle linkage. This little rod will allow the primary throttle blades to open before the secondaries, making it easier to modulate the throttle. I installed an adjustable progressive linkage kit. This allows me to choose how progressive my throttle body is – anywhere from AOC to Joe Biden. The linkage kit is available from EFI System Pro. I paid $37.80 for mine and it was a worthwhile investment. EFI System Pro also offers a fixed linkage for those who don’t enjoy adjusting things. They have an excellent website with good technical information and support for all of the products they offer. I set the secondary throttle blades to open when the throttle position sensor was at 40%. I reprogrammed the Holley ECU, telling it that I now have a progressive linkage and that the secondaries open when the throttle position sensor is at 40%. It was that easy. The test drive revealed a much better throttle feel, without the jerking when all four throttle blades opened at once. The only drawback was that all of the learning that had taken place was lost due to the reprogramming of the ECU. One more bit of tuning was to advance the timing to 14 degrees of advance, and then tell the ECU where the timing was set.

I was now confident enough to take the LeMans wine tasting in Woodinville with my wife. We belong to several wine clubs in the area and had wine to pick up, so let’s have the LeMans do some learnin’. The warm sunny day necessitated the use of the LeMans’ Vintage Air air conditioning. When air conditioning activates, it draws power from the engine, lowering the RPM. Older cars would compensate for this by having a solenoid that raised the RPM slightly when the air conditioning clutch engaged. The old Quadrajet carb on the LeMans did not have this solenoid because my car originally had no a/c. With the old carburetor, I set the idle speed with the a/c turned on. Otherwise, when the a/c activated, it might lower the RPM so much the car would stall. The drawback to this method is that when the a/c is off, the car idles at a speed higher than one would like. Also, I would turn on the air conditioning when turning the car off to lower the RPM to avoid dieseling. The new Holley Sniper EFI does a great job of controlling the idle speed regardless of air conditioning status. I no longer have to worry about the a/c clutch kicking in and stalling the engine or have the person to the right of me wonder why my car is idling so high at a stop light.

The wine day was a success. We picked up wine from Mark Ryan Winery, Cherry Valley Winery (our local winery, and good roads heading out to it) and Village Wines, where we also enjoyed lunch. The LeMans is good for wine pick up day because it has an enormous trunk. It can hold enough alcohol to keep Charlie Sheen happy for at least an hour. It’s not perfect, though. The trunk is bare sheet metal, so when a rogue bottle of wine escapes from its canvas wine bag it hammers around, sounding as if we have the worst steel drum band ever locked in the trunk. I think some sound deadening mat and carpet are in order.

The last task to complete this process will be to mount the 3.5 inch touchscreen display in the car. I will have to drill a hole in the firewall to route the wires, insert a grommet and find a good spot for the display. One thought is to mount it on the steering column, replacing the column-mounted tachometer that resides there currently. Holley’s screen can display information including RPM, water temperature, air/fuel ratio, fuel pressure and battery volts. Eventually I might choose to have the ECU control timing, but I need to consider the Terminator-esque repercussions before going down that road.

Overall, I am very impressed with the Holley Sniper EFI system. Matched with their EFI fuel tank, fuel pump and sender, plus the addition of a spacer, EFI System Pro’s progressive linkage and the 3/8″ fuel line, it’s a great combination that makes the car easier to drive, improves performance and I expect will improve fuel economy. It’s good enough that I am seriously considering duplicating this effort on the Corvette. As for now, I need to teach my ECU some lessons, so it’s time to hit the road.